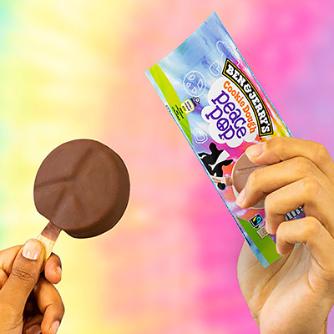 As part of the digital-first promotion being deployed to market the new ice cream flavor, Snapchat users can scan individual and multi-packs of the ice cream and open up an augmented reality lens transporting them to a summer experience dubbed the Ben & Jerry’s Festival. The Ben & Jerry’s Festival experience is meant to evoke the “euphoric taste” of the Peace Pop ice cream as well as Ben & Jerry’s other lines of ice cream products. Inside the augmented reality festival, shoppers and Snapchat users will find ice cream vans and can watch a “live” performance from Woody, Ben & Jerry’s cow. When users turn the lens around, the AR Snap filter applies an 80s retro look that users can experiment with. The campaign was created in partnership with Mindshare Global and aims to drive awareness of Ben & Jerry’s to a Gen Z audience.

Snapchat’s augmented reality lenses are becoming a popular way for brands and retailers to experiment with new marketing formats and leverage interactive new technologies to better engage with their key audiences. The social platform has also teamed up with American grooming brand Old Spice to create seven unique AR experiences for Old Spice’s Wild Collection.  Each snapcode unlocks a unique portal lens experience, with dedicated rooms for each Old Spice line for Snapchat users to explore in AR. Users simply open the SnapChat app, point their camera at the deodorant, and an AR filter appears atop the bottle with moving graphics of adventurous characters for each of the seven different scents. Big box retailers like Walmart are also featuring in-store displays with the Snapcode for shoppers to try out while shopping in-person.

A shift in how consumers are discovering products and services, as well as connecting with their favorite brands and retailers, has ushered in a new wave of promotional and educational activations. Driving consumer engagement through embedded activations and immersive brand experiences leveraging new technologies is helping brands and retailers maintain relevance and drive loyalty within an increasingly hybrid landscape. Unique capabilities of new technologies are powering next-generation marketing formats that blur the most loved aspects of physical activations with the streamlined nature of virtual and digital experiences